Stories That Make Our Tails Wag Kenji is a very special dog. He was quite shy and aloof at first. If you want to get his attention, you need to leave him alone instead of showing him how much you love him. Most of my friends have met him and I told them to ignore him when they first meet so Kenji can be less protective. After almost four months, he is finally comfortable around me. Now he knows that I’m the one to take him home after playing, so he comes to me after he is done at the dog park and waits by me to take him home.

I love him a lot! He looks like a little fox (actually somebody insisted he is a fox). He is a great emotional supporter. Whenever I come home frustrated or tired, he will wait patiently to be walked and occasionally smile (with treats).

He loves a lot of things. His favorite toys are the ones that squeak. He would get them and destroy them to a point where they can’t squeak anymore. He also LOVES walking and nature a lot. He will try to get out whenever he has a chance and he cries a little when you say no. He has lots of friends at the dog park in our neighborhood. He prefers small dogs over large dogs. His best friend is the other Shiba Inu that lives here. 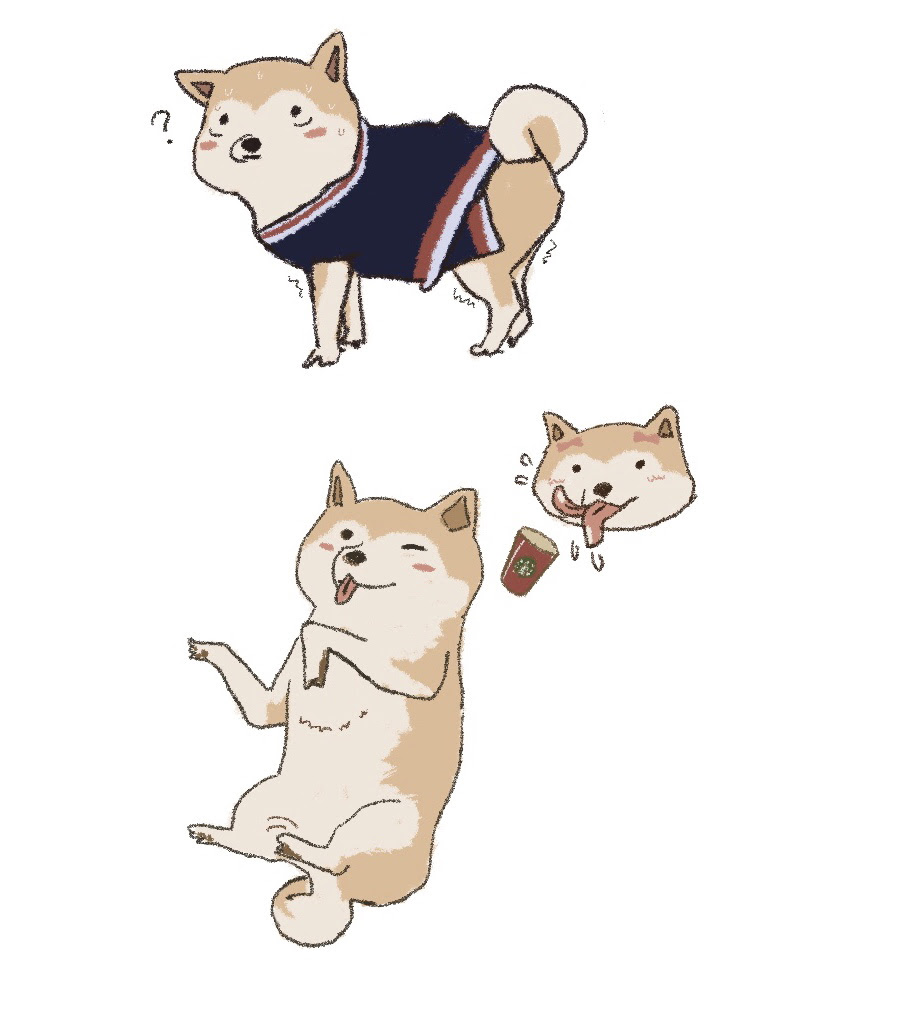 and family. A friend of mine drew a very cute picture of him that features three cute photos of Kenji. He was scared when we put a sweater on him and froze for five minutes without moving a bit. Then we took him to Starbucks to get a Puppuccino. He was also being cuddly by showing his belly.

Do you have a happy MCPAWS adoption story? We’d love to hear from you! Please contact Kattie Kingsley if you’d like to be featured in our monthly newsletter kkingsley@mcpaws.org! 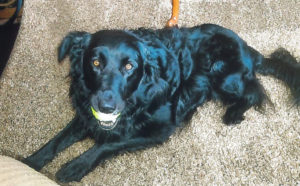 Bailey, formerly Hazel, has been in her new home for almost four months. Even though she is an inside dog, she has her own fenced in yard with bunnies, squirrels, and birds to chase when she is not busy playing ball. She also loves to go fishing and hiking.

Bailey is the best. She is extremely smart and so loyal. She is still quite wary and nippy with strangers, but seems to be improving. Her smiles and kisses are never ending and free to give out after her brushing at night before bedtime. I was very hesitant to keep her at first because I had just lost my black Lab that week. Chelsea, my granddaughter who works at MCPAWS, called to tell me she had the perfect dog for me that needed a special home (quiet with no dogs or children.)

I am so grateful to her for Bailey. She has really been such a blessing for me. She is loved as much as she loves, which is endless. Thank you Chelsea, and the staff at MCPAWS. I have the most precious, smart, beautiful, loving, and loyal girl in the whole world. May God bless all of you for blessing Bailey. XXOO 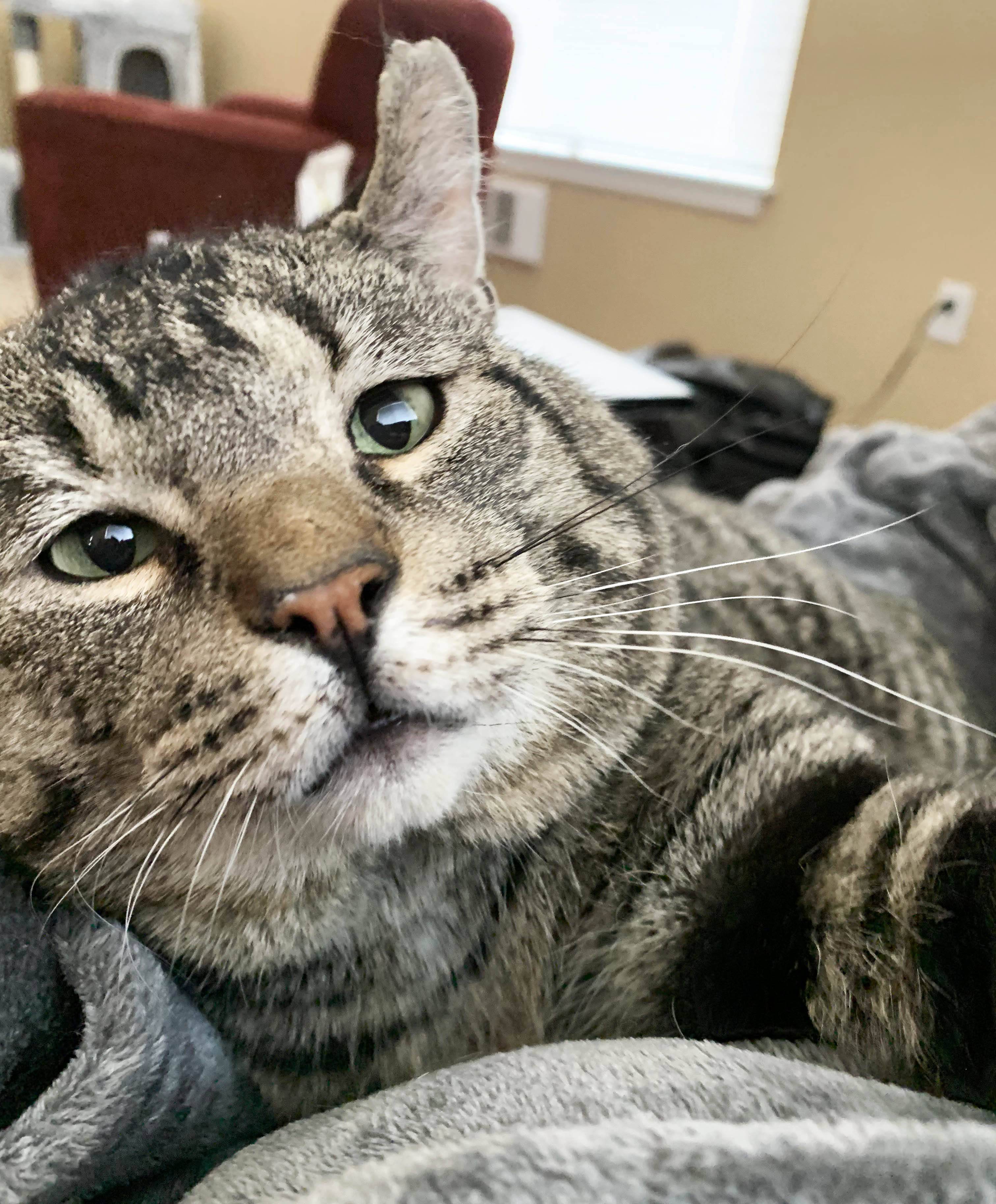 We first found Chester in January when he arrived at MCPAWS.  We had just moved into our apartment and were unable to adopt him right away, but we kept our eye on him until we were able to. He eventually came home with us on February 12th. It took a few weeks of gentle coaxing to get him to quit hiding from us, but now that he’s comfortable, spending time with us is his favorite activity!

Chester loves to play with fling toys and strips of leather,take long naps and eat lots of food. He is very spoiled, and only drinks the finest Brita filtered water! He is very cuddly and is often times found napping on our laps. Chester never turns down pets, and the quickest way to his heart is by scratching the base of his tail.  His eyes close halfway and his tongue starts to flap and hang out every time! We love Chester and could not have asked for a better kitty! 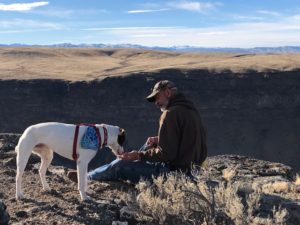 It’s been a joy helping/watching Louie gain his confidence. The world outside the shelter is big, new and sometimes very scary for him, but he’s facing it head on. He couldn’t wait to see Christa (the manager at MCPAWS) and show her that her faith in him wasn’t wasted.

I have to say, after the two little bits in the first few minutes of our meeting, I had wondered if I was ready to take on the task. And I questioned myself as I was signing the papers with white knuckles. But, some believed me to be a bit of a hard case too, and where would I be if no one believed in me and took a chance?

I often wonder what was going through his head when I took the picture of him on our drive home. Louie is growing into his own and in leaps and bounds he’s doing well facing a new world. Louie has learned several basic commands. Sit, stay and lay down are his best and he’s wonderful on a leash. His favorite thing, besides treats, is our hikes together. He loves to run and explore the new world around him. And Louie has a girlfriend. Thank you guys. I couldn’t ask for a better friend and companion. 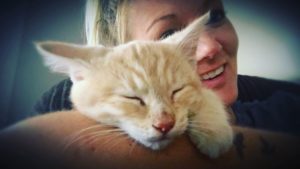 Next month will be my one year anniversary as an employee at MCPAWS. While being an employee here is wonderful, one of my most favorite parts of the job is getting to foster kittens! That brings me to my failed foster Freckles.

Freckles was the 13th kitten that I had fostered and I can truly say it was love at first sight, or first hiss if you ask her. I had finished my dog kennel shift and I had heard that we had a pretty cute little yellow kitten upstairs. When I approached her kennel she started hissing and spitting and falling all over herself while head nudging and purring! It was quite the combination of emotions, if you can imagine. It was in that moment that I fell in absolute love with this darling, overly dramatic kitten. I took Freckles home to foster and it was quite clear she had cattitude. She did pretty much whatever she wanted, when she wanted, and it didn’t matter what got in her path.

She quickly made friends with my other cat and my dog Sid. The more time I spent with her, the more obvious it became that she was home, and none of us had any intentions of her leaving. She really is the best. She loves to snuggle with us, the dog, and the other cat. She gives the best kisses. She is always making us laugh with her silly antics and uncoordinated demeanor. She’s a lot more doglike than she is catlike, but it makes her unique and it makes for some funny entertainment. She is just the best and fits right in with the rest of us! 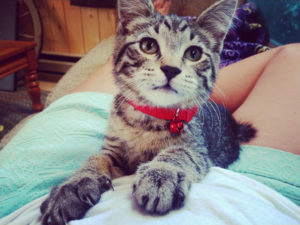 I fell in love with the little guy’s spunk and personality from the moment he got here. I talked to the staff at MCPAWS about the possibility of fostering him while he healed from surgery. During the week at my house, not only did my dogs (Mo &Rocky) fall in love with him, but so did my roommate! I had to explain to her that we were only fostering and legally, he did not belong to us. That did not stop her from going to McCall Pet Outfitters and buying a collar and enough toys to last him a lifetime.

Lumber’s spunk and sassy personality fit into our crazy lives so fast and easy! It was inevitable that we make his stay permanent! Thank you MCPAWS for allowing me the opportunity to adopt this little guy and give him a forever home! 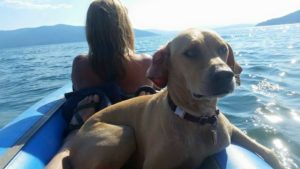 Stan joined our family in May 2013. We fell in love with him the first second we met him at MCPAWS. Stan was kind enough to consider us as decent people for a few hours, but only definitively decided he was going stick with us when he saw us cooking bacon for dinner.

Stan spent quite a bit of time at the shelter, he was brought back a couple of times and we were eager to make sure we were doing all that we could to become the right family for him. At the end of the day, Stan has been the one who made sure he was the right family for us. Since the first minute we adopted him from MCPAWS, he has given us love and happiness. No matter what we are doing, Stan is there with us and happy to take part in our activities, as long as we never forget that playing ball is the most important thing in life!

Despite having some anxiety issues for situations he is not familiar with, Stan does everything we do and much more. While we were living in the US, Stan joined our canoe trips with all his courage in the summer. He went through the rude Midwestern Winter without a complaint, as long as the Frisbee did not freeze.

Two years ago, we moved to Europe and Stan bravely followed us. While we cannot say he enjoyed his transatlantic flight very much, he has since then been an aficionado of our European Grand Tour. He ran after cows in Switzerland, jumped into muddy ponds in Munich, said “hi” to ducks in England, chased the waves in Spain and the birds in Italy, and the list goes on. Paris seems not to be made for Stan, there is nothing to chase apart from the pavement.